Manufacturer of the kit: Akademy

Greetings to everyone! I would like to make my debut on your site with the model that is quite rare. Well, for some reason our brother modeler doesn’t like this plane. And for nothing. For the first time the author learned about the existence of this airplane from the Foreign Military Review #2, 1985. On the low-quality image there could be seen a silhouette of the aircraft unusual to the eye. There was something dangerously-attractive in it… You immediately understand, there will be no good if you meet with this Dragonfly. At that time I didn’t know the true size and characteristics of the machine. Now a couple of mouse clicks and presto: A-37B Dragonfly – light multi-purpose attack aircraft developed by the US firm Cessna Aircraft. In 1970, Cessna built a specimen of light attack aircraft for special purposes Model Cessna 318E, based on T-37. It made its first flight in September 1967. After evaluation tests in May 1968 supplying of the first batch of aircraft A-37B started.

Features and characteristics of the prototype of scale aircraft model

The design of the A-37B was differed from the test model YAT-37D in that the glider was designed for 6-fold overload, the maximum capacity of internal fuel tanks was increased to 1920 liters, the aircraft could carry four additional tanks with total capacity of 1516 liters, there was equipment for in-flight refueling . The motor system consisted of two turbojets General Electric J85-GE-17A. The aircraft was equipped with a 7.62-mm machine gun mount GAU-2B/A Miniguni, eight underwing nodes of outdoor suspension, designed for various types of weapons with a total weight of 2268 kg. In addition, A-37B was equipped with a camera and a gun camera to assess the shooting. To protect the crew of two people around the cabin there was installed armor protection from laminated nylon. By the time production ceased in 1967 in total 577 attack aircraft A-37B were built. These aircraft were delivered to the countries friendly to the United States. I’ll add that the aircraft was equipped with ejection seats, and thrust reversers… A cool thing! 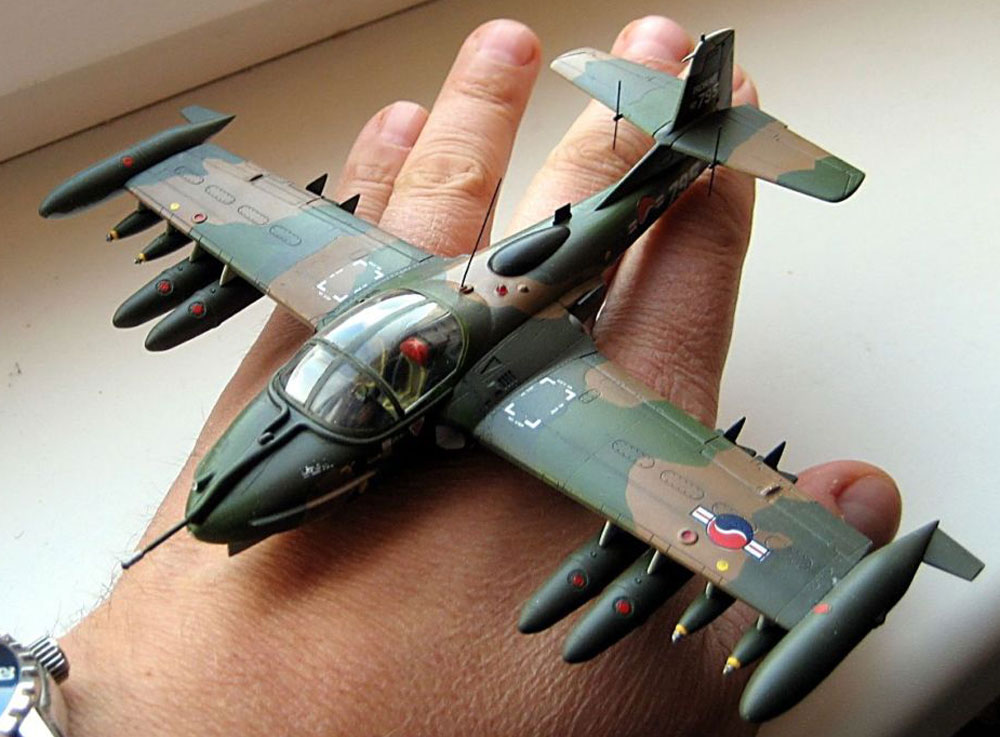 My way to constructing this plane model

About 10 years ago, in our market appeared a model of company Akademy. Peering into the box, I was disappointed… The dimensions were too modest. 144 scale fit better. And a year ago, I saw the model assembled by my friend, and in a very serious performance. And I caught fire. In summer, in the model shop, among the thousands of boxes, I accidentally discovered this plane model kit. In quite a nice price of $10 I bought it without hesitation, and in a couple of weeks, this model decorated my collection.

In the assembly, it turned out to be not very difficult, the improvements are only an imitation of the inner surface with raw plastic, antennas, formation lights from transparent molding tree covered with nail polish. Painting – Humbrol Enamel, Southeast Asia, the typical camouflage for Air Forces of Southern Korea. Aerobatic team Black Eagles probably wasn’t carrying of any weapons, but how to do without it? Photos are partly without a flash, because it greatly distorts the colors. Thank you for attention. I recommend the aircraft model to the building, it’s a heap of positive emotions.