This is one more fruit of a collaborative effort of three modelers studio “Eastern Front”, each of who took on him his share of responsibility: Pavel Cherepanov – assembly, Roman Vorobiev – painting, Vladimir Yashin – toning.

Prototype of the model of armored troop-carrier M3A1 Scout

Painting and toning were carried out without reference to any particular photo – that’s just a standard monochrome coloring and toning in the style of our studio. In the course of the work we discussed various prototypes, including a three-color camouflage, but in the end it was decided to make the model on the base of the car with the letter H in the square.

The kit by Hobbyboss was taken as the basis, which however suffers from many ailments of geometry and detailing. Some even believe that the old kit by “Zvezda” is more correct. In terms of assembly, I tried to fix some elements, without the purpose of treatment of all the shortcomings – only a few things that catch the eye. While building I used a number of additional kits, resin and etched parts of machine guns, resin wheels, resin roll from overcoat made of canvas, two kits of etching and something on the little things. 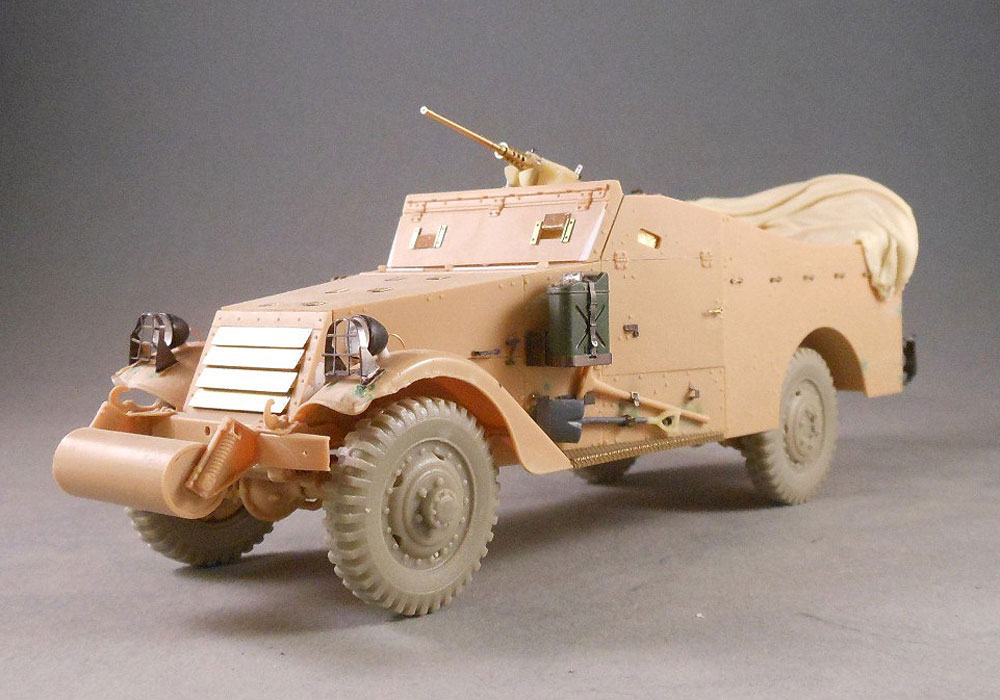 In the interior the most notable improvements relate to the seats, which are re-made from 2K-putty, covered with foil and smashed a bit for a more natural look. Mass of nerves was spent on fitting the wiring to headlamps and the headlamps themselves, which eventually were being transferred five times from place to place. Note the crashed bumpers and fenders. In general, now, considering the photos, it is difficult to remember all the vicissitudes of the work on the model, which took more than a year… It is important to mention that the etching is noticeably different (the kit for the model Hobbyboss and Revell), and each item was adjusted individually, that better suited to this case, since there are many museum photos.

The model was painted with Tamiya acrylics, base toning – in the in usual style of our studio – filters, oil, washes, pigments, chips, etc. Vladimir Yashin made very showy splashes of mud using speckling method – spraying with a brush. This can be done with a finger and an airbrush. Also pay attention to rust, especially on the crumpled rear bumper, which was applied not only by dry pigments, but also with the help of MIG Rust Effects liquid. Chips and scratches were made two-layer ones, where it was possible, with a lighter “bedding” and black and brown interior parts. Pigments of green shades were rubbed into the sides, with a brush dipped in solvent.

We express our gratitude to Alexey Kapitonov for assistance in selecting the photos and valuable tips for building and toning the model.