Plastic airplane model F4U-4 Corsair “Guys, look what I can do!”

Manufacturer of the kit: Hasegawa

Hello colleagues! Let me present you my F4U-4 Corsair plastic airplane model assembled for the tournament “Screws on the Deck” on ScaleModels.

In my opinion, this old plastic model very accurately corresponds to the name of the tournament)) I entitled the composition “Guys, look what I can do!” 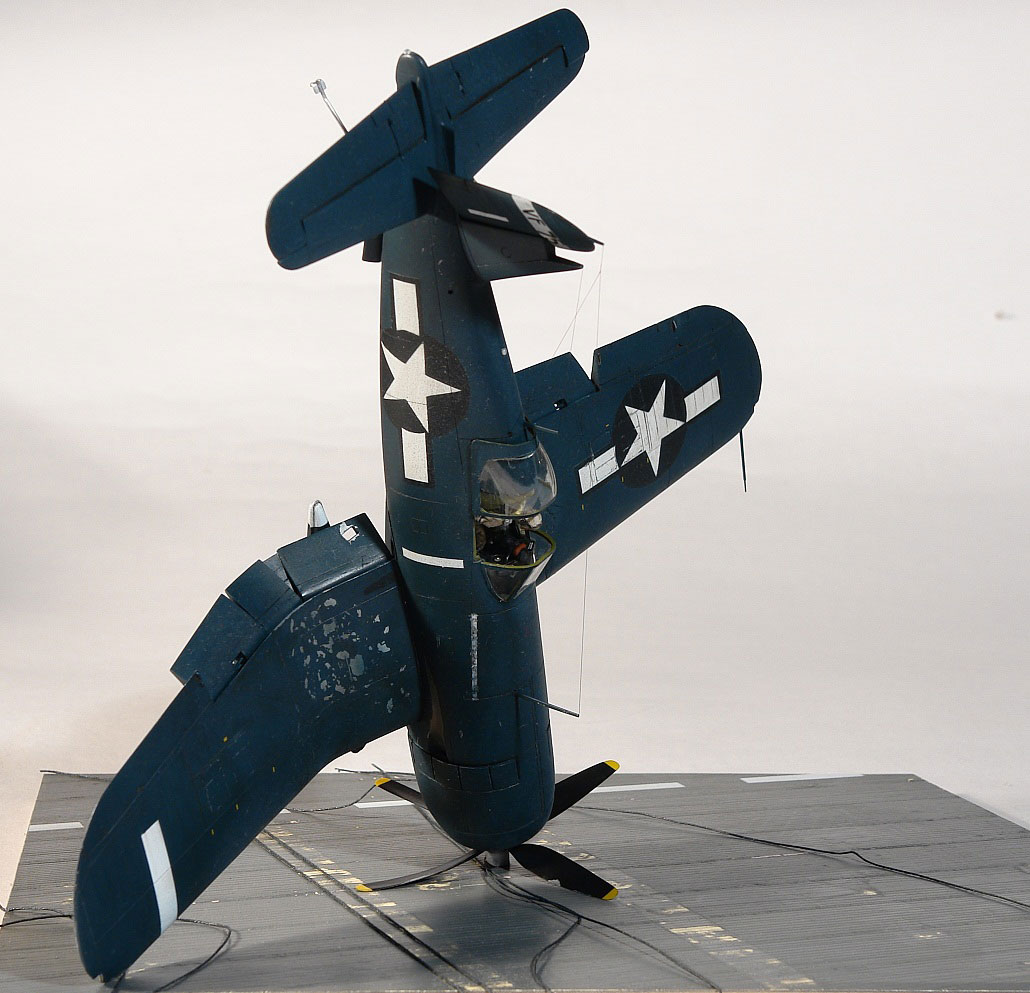 So, I decided to assemble an occasionally seen model, quite a funny photo of a hooded Corsair, that was a poorly assembled and poorly painted model. I decided to disassemble and remake it. First I though I’d cope with it during a couple of weeks, gee;-) that was far from it ), for I week I kept it in “Mole”, “Mole” ate all the decals, but didn’t affect Zvezda’s acrylic! Then I was doing everything right on the paint. I remade the cabin as an earlier four, all is homemade, dash-board printed on inkjets and assembled as a sandwich, the pilot is ICM, it was in the kit with the Mustang. Belts made from etched buckles (residues from Airacobra) and cigarette foil. I cut the pointing-up on the inside, on the old paint it was difficult and not always straight:-) I cut almost all the control surfaces except the ailerons, and tormented for very long time with the flaps, they didn’t want to correspond to my idea!

My sufferings over the plastic airplane model
The plastic was hard and brittle, I glued it literally by pieces, adding the missing details from scrap materials according to drawings and photos. I carved a niche of tail wheel, altered rack and wheel, added the a niche the way I managed to glued fuselage with a power set. In the niches of the main racks I made hydraulic flaps, and reduced all the flaps in thickness. On the racks I lengthen the rods of shock absorbers as they are not loaded, single-links are changed, and wiring is added. I didn’t do anything with the engine and weapons, the engine simulation is excellent. It is a pity that it’s not visible!

The exhaust pipes are from heat shrink tubes. Bano from Plexiglas. Butterfly antennas. The sight from the molding trees. Rods from wire. Painting: first super-chrome ABRO, then Akan, further Futura and washings MIG + dry pigments. Finishing matt lacquer. All OZ are painted except the numbers dialed from different decals.
It seems I haven’t forgotten anything